Ashore on the US Virgin Islands, we experience the intersection of past and present, history and ecology 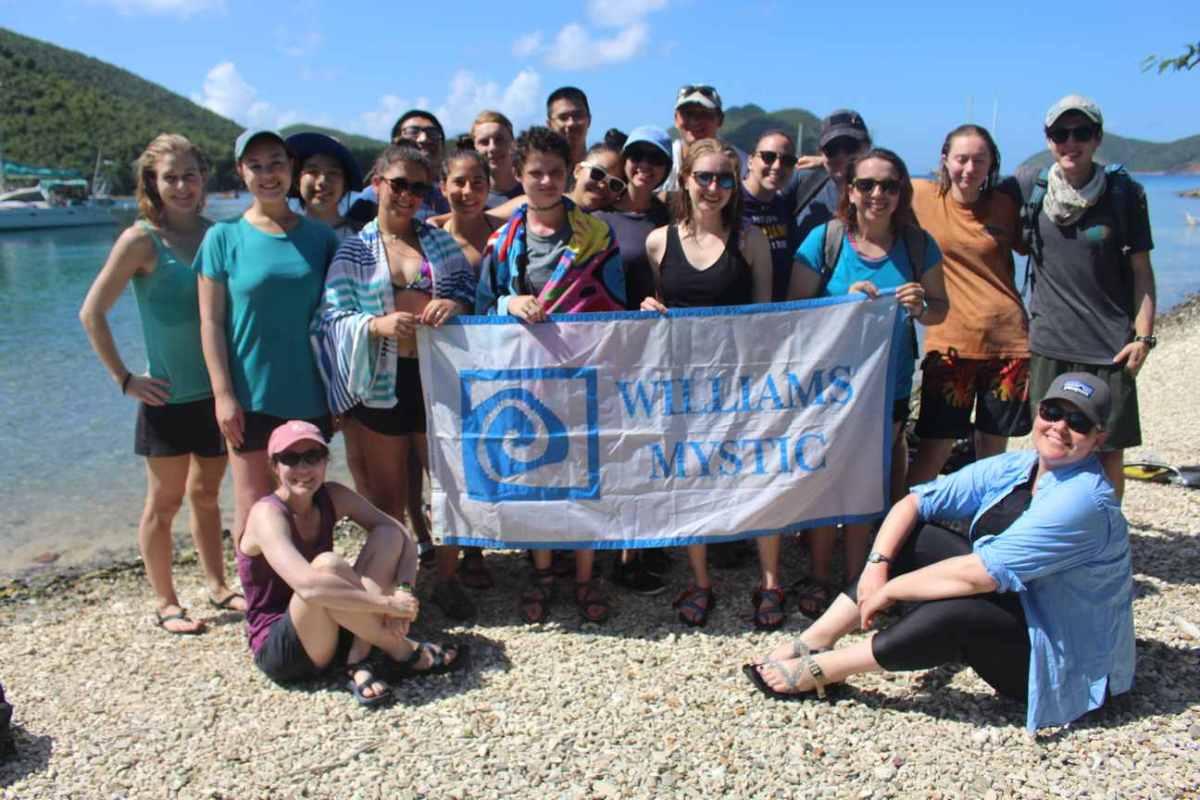 Here aboard the SSV Corwith Cramer, we kicked off February with a full day of science and sail handling. The trade winds gave each watch the opportunity to practice gybing the ship as land once again emerged on the horizon. To prepare for a field trip ashore, we diligently struck the sails and dropped anchor in Francis Bay on the island of St. John, U.S. Virgin Islands.

In the afternoon, students had to opportunity to go “up and over”: climbing up the port side rigging of Cramer’s foremast and down on the starboard side. Many said it was a highlight of their time at sea so far!

Students are also busy working in pairs on their science presentations, preparing reports and posters that interpret the incredible amount of scientific data we have collected during our time aboard.  When they’re not working on their poster presentations, they are rotating through small group tutorials in which they interpret these data (along with their newfound life at sea) through the lens of the humanities for a truly interdisciplinary learning experience.

Students stood Anchor Watch overnight, taking twice-hourly anchor bearings (in addition to the usual weather and boat checks) to ensure that the ship held its position. Excitement was high as we thought about what might await us onshore the next morning!

On Sunday after breakfast, we loaded into Cramer’s small boats and headed ashore for a wet landing on a pristine white sand beach.  Unlike the busy cruise ship port of its neighbor St. Thomas, St. John is a smaller, quieter island (just twenty square miles), mostly covered by the U.S. Virgin Islands National Park.

We hiked through the park, observing and sketching the tropical flora and fauna, to the ruins of Annaberg Sugar Plantation.  Students learned about the Triangular Trade, Middle Passage, and environmental degradation caused by sugar plantations in the Caribbean.  It was especially moving to read aloud Alphaeus Osario Norman’s poem “Amina Negros,” which chronicles the 1733 uprising of the Africans enslaved at Annaberg, where the events of the poem took place.

After Annaberg, we made our way down and along the shore to Waterlemon Cay, where students were briefed on coral reef biology and safety.  Then it was time to snorkel!  Students who had never snorkeled before got the hang of it quickly and were soon cruising the reef like pros, spotting a variety of corals, urchins, baby barracuda, grey snapper, and lots of tiny colorful reef fish.

We returned to Cramer, weighed anchor and by dark we were sailing, this time westward on a broad reach as the sun went down on another incredible day of the Williams-Mystic Offshore Field Seminar.

Please note that vessel tracking information is NOT updated continuously and the Cramer isn’t always able to provide updated location information. (Good reception isn’t a guarantee at sea!) If you notice that the Cramer appears to be in the same location for an extended period of time, it simply means the website has not yet been updated.

You can also look back at blog posts from previous Offshore Field Seminars here: https://williamsmystic.wordpress.com/category/field-seminars/offshore-field-seminar/.

From how to steer or furl sail, to how to wake people up for class or sanitize dishes, we have been learning specific methods to allow 37 people to safely and happily travel, live, and learn together on a ship only 40 meters long.

On Sunday, January 27, the Williams-Mystic Class of Spring 2019 joined SSV Corwith Cramer in San Juan just in time for lunch.  For the last 48 hours or so, we have been busy learning ship operations, getting used to walking on a rolling ship, and enjoying being out at sea.

For many, of us, it is our first time out at sea.  And as Melville wrote in Redburn, “People who have never gone to sea for the first time as sailors cannot imagine how puzzling and confounding it is.”  Unlike Melville’s protagonist, however, we have watch officers who are kind and patient teachers, and who allow us to ask lots of questions.  From how to steer or furl sail, to how to wake people up for class or sanitize dishes, we have been learning specific methods to allow 37 people to safely and happily travel, live, and learn together on a ship only 40 meters long with three heads and two showers.

During orientation, we got to know the parts of the ship and our responsibilities on board.  Everyone participated in safety drills and we also conducted our first science deployments in San Juan Harbor.

Then we headed out to sea, into deep water north of San Juan.  Two days in, spirits are high.  We are getting used to the routine and the warm tropical weather.  The food has been amazing thanks to our fantastic stewards and we have even enjoyed some entertainment thanks to some talented students.

Stay tuned for more updates from our Offshore Field Seminar!

Track the Cramer‘s progress by clicking the link below!

Important Note: Vessel tracking information isn’t updated continuously and the Cramer isn’t always able to provide updated location information. (Good reception isn’t a guarantee at sea!) If you notice that the Cramer appears to be in the same location for an extended period of time, it simply means the website has not yet been updated.