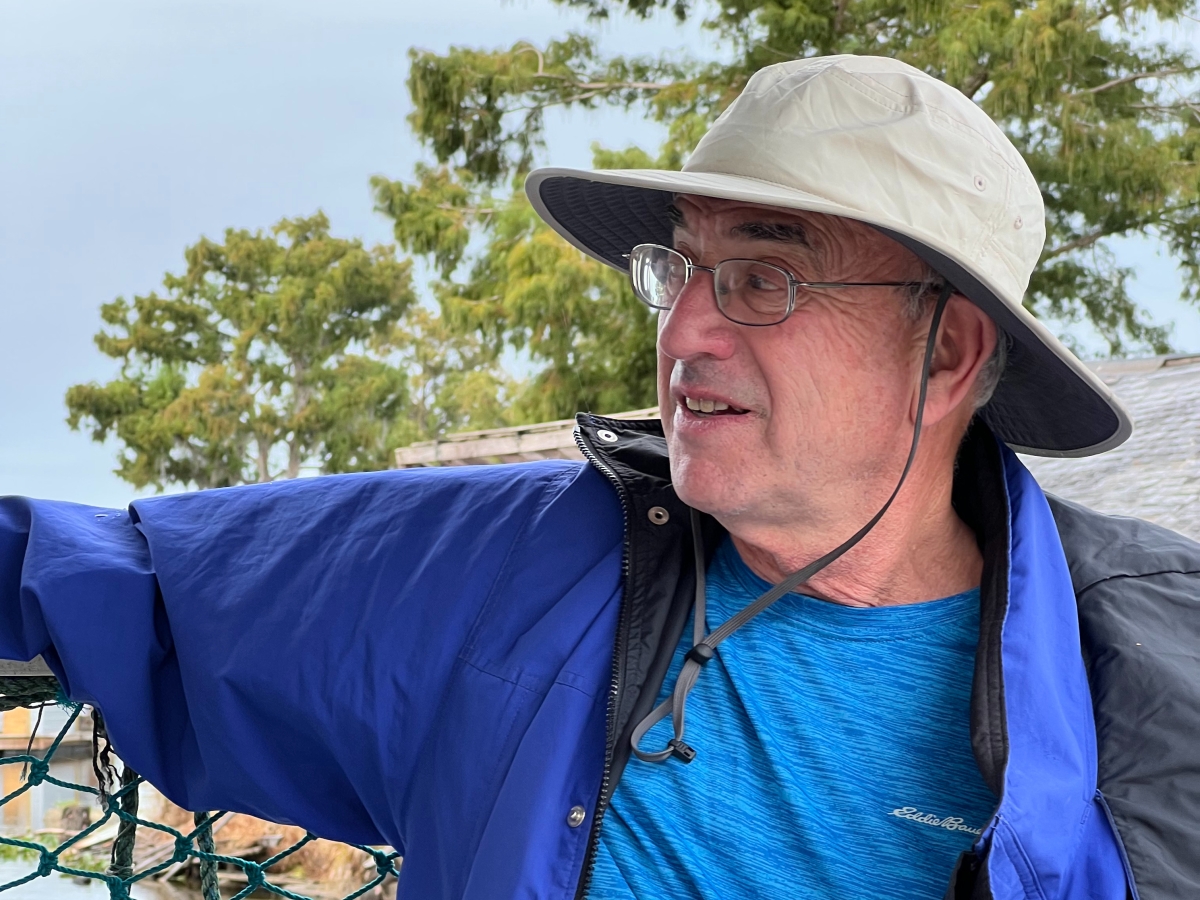 Arriving in Mystic in the Fall of 1977, Eric Laschever could never have anticipated how much the program would impact his life moving forward.

A senior history major from Williams College, Eric was looking for ways to spend part of his final year away from Williamstown. Seeing a poster with a picture of Charles W. Morgan and Joseph Conrad docked at the Seaport, Eric was spurred to talk with WM Founder Ben Labaree, who encouraged him to apply for the program. Having grown up sailing on the New Jersey shore, Eric was drawn in by a program that focused on the ocean.

Thus, Eric joined 20 other students from colleges across the country to become the guinea pigs in Williams-Mystic’s inaugural class. That class became known as the Leeward Railers, named for their collective seasickness aboard the SSV Westward during the program’s very first Offshore Field Seminar. Their offshore experience served as an early bonding agent for the Leeward Railers, one that would only grow throughout their time in Mystic, and one that remains strong to this day.

“I think the bond among our class was strong and has remained strong among many of us,” Eric said. “We have so much affection for the program and the original director and his family. Over the years, we’ve gotten to know the successors to Ben, as well as key faculty members who have been here.”

The impact of Eric’s time with Williams-Mystic took shape shortly thereafter, as he began to pursue a Master’s degree in Marine Affairs from the University of Washington. His thesis work on a then new 200-mile Alaskan fishery zone led him to his first “real job” working for the state of Alaska on a variety of coastal and environmental issues. More recently, his continued connection to the program allowed him to work alongside Katy Robinson-Hall and Chief Shirell Parfait-Dardar to pursue federal recognition for the Grand-Caillou/Dulac Band of the Biloxi-Chitimacha-Choctaw.

Fast-forward to Fall 2021, feeling a deep connection to the program, Eric talked with WM Director Tom Van Winkle about a way for alums with time and capacity (e.g. older)  to use their talents to remain connected to Williams-Mystic. In particular, Eric wanted to use his expertise in marine affairs and relevant knowledge of Louisiana to serve as a resource for students in their policy course. A year later, Eric arrived back in Mystic as the program’s first Senior Fellow, donating his time to the program.

Eric immediately noticed the differences he saw between Williams-Mystic in 1977 and Williams-Mystic in 2022. While he noted similarities in academic rigor and use of the Museum as a teaching tool, Eric valued the program’s current devotion to interdisciplinary education, citing the ways in which professors intentionally weave topics together to make for a more well-rounded curriculum. But, above all, Eric was struck by the remarkable relationships the program has built with stakeholders and community leaders in Louisiana, as he got to see firsthand when the program returned to The Bayou State last October.

“Underneath the intellectual rigor is the emotional feeling of connecting to people in places who are experiencing the challenges of living in coastal communities in real time,” said Eric.

One of Eric’s responsibilities on the Louisiana Field Seminar was to give a talk to students about the criteria a Native American tribe must meet to be federally recognized, a subject he is deeply immersed in on behalf of one of the program’s Gulf Coast hosts. Adding another dimension to the talk, Eric gave his talk at a graveyard that is said to have buriedTribal Ancestors, one of whom received land on the Gulf via the Dancing Rabbit Creek Treaty, the infamous treaty that launched the Trail of Tears for most of the Choctaws to west of the Mississippi.

“The idea of being in what may have been his final resting place, and talking to students today about the history and how it comes to bear in the effort to achieve federal status, is very poignant and powerful,” said Eric.

When reflecting on his experience with the students of F’22, Eric was continuously impressed by the way students grappled with and discussed very complex issues. When advising students for Moot Court, Eric remembers being amazed at how the students mastered and argued complex legal issues in front of a judge with just 4-5 days of preparation. In Louisiana, Eric remembers being impressed during van rides and the ways students balanced fun moments, like singing to oldies and more contemporary tunes from the students’ play lists, with serious moments and interesting discussions.

Having the chance to connect with a younger generation of students was another big motivator for Eric to return to Williams-Mystic. Eric noted that when he was their age, he was able to witness many of the early environmental laws being put into place. 45 years later, Eric understands that the world his generation is handing off to the next is not in the place it should be.

“One of the important things to me in this chapter of my life is to spend time with young adults, to share some of what I’ve learned, and to give them tools to face the challenges that my generation is leaving them,” said Eric.

In this regard, Eric encourages future students to remain hopeful about a better world, advising them to cultivate hope and use it to channel action.

Williams Mystic remains a critical part of this equation, in Eric’s eyes, as it provides important information and tools to inform and ground such action.

An interdisciplinary ocean and coastal studies program integrating marine science, maritime history, environmental policy, and literature of the sea. All majors welcome and 100% of financial need met! View all posts by Williams-Mystic

🚨 Williams students: looking to learn about Mystic with great company and great food?
Nothing like a pre-Offshore navigation class 🧭 🗺️
After traveling from far and wide and braving the snow, our 21 Spring 2023 students have arrived in Mystic! S’23 is hitting the ground running, as they all leave for the Offshore Field Seminar on Sunday. Lets give them all a warm Williams-Mystic welcome! #ThisIsYourClassroom
Recently, the Williams-Mystic team said “sea you later” to another unforgettable class. We will always remember your many bags of rocks, spontaneous song breaks, and dubious Grover heists. But, most importantly, we will always remember the incredible community you built together — we’re so glad you got to share it with us. Happy Holidays from the W-M team!
#ThrowbackThursday to some of our favorite memories from the Louisiana Field Seminar. Want to learn about what happened in Louisiana from the perspective of a current Williams-Mystic student? Visit the link in our bio to read our latest blog post! 🌊🐊
Here’s a little throwback to this semester’s Friendsgiving, just because we’re feeling particularly thankful today… Happy Thanksgiving from the Williams-Mystic family! 🦃